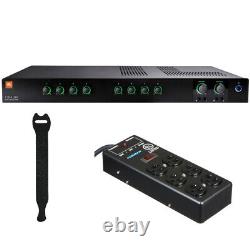 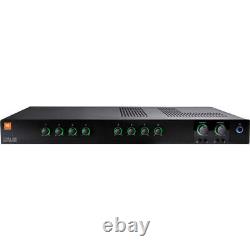 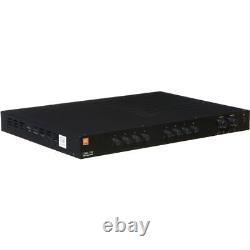 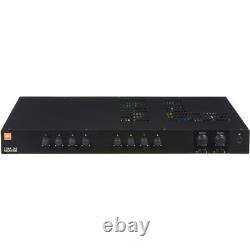 It's capable of reaching 80W of peak power with 10W per channel. The unit's front panel sports volume controls for each channel, as well as two master volume adjustment knobs, two sets of bass and treble controls, and a power switch. The volume controls are illuminated so they can be seen and operated in darkened environments.

The amplifier, capable of driving both eight and four Ohm loads, can be used with 70V and 100V distributed audio systems without the need for a separate transformer. On its back panel you'll find euroblock connections for mic/line inputs, as well as unbalanced RCA inputs, speaker connections, dip switches for input routing, and more. The unit is also equipped with two RJ45 connectors for use with JBL CSR-V in-wall volume controls (available separately). This Commercial Series mixer/amplifier boasts such features as voice activating ducking (useful for paging over background music), priority muting for channels one and five, and a sleep mode which automatically powers down the unit when no audible signal has been received for longer than 30 minutes.

2 x 3-pin Euro-block (aux out). 2 x RJ-45 (remote volume control). Selecting "Immediate Pay" is the way to go. Memory cards and any other Blister Pack items are not returnable once opened.

Underwater equipment once taken underwater. Inkjet printers (once ink cartridge/ribbon has been installed). Processing equipment (once used with chemicals). Educational DVDs, Tapes and Books once opened.

This item is in the category "Musical Instruments & Gear\Pro Audio Equipment\Amplifiers". The seller is "downtownphoto" and is located in this country: US. This item can be shipped to United States.