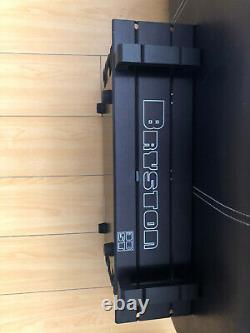 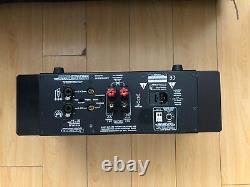 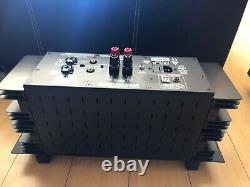 Below are the current specs I believe. The 3B-ST is a solid-state stereo power amplifier with an output stage running in class-AB2. While the entire chassis is used as a heatsink, the 3B-ST maintains Bryston's black, finned, rack-mount style. In fact, one could stack the 3B-ST, the 4B-ST, and the 7B-ST, and they would appear very similar from a distance. Similar interior design approaches are also used for the 3B-ST and 7B-ST. The 3B-ST's front panel is a ¼ sculpted, rack-sized piece of aluminum inscribed with two narrow horizontal grooves (the two front handles are similarly grooved). This single piece of extruded metal is buff-finished with a fine abrasive like jeweler's rouge; the resulting surface is so smooth that a finger rubbing the surface leaves no mark. The only lettering besides the company name is the "ST" logo. Otherwise, there are two tricolor LED power indicators, one per channel. These remain green while the unit is powered, turning yellow at the clipping threshold, red for clipping or internal fault.

The clip-sensing circuit uses a comparator to detect the source of signal distortion, including clipping, short circuits in cabling, and excessive DC or supersonic signals. The brief instructional notes indicate that it's normal for the individual right and left LEDs to decay at different rates.

The square Power pushbutton is the only front-panel control. The back panel has a complete set of inputs and switches. Each connector or switch is surrounded by clearly labeled instructions in white lacquer, in English and French. This makes it possible to set up the amplifier without having to locate the written instruction sheet.

From left to right along the back panel are the following features: first, a detachable AC connector with a removable fuse holder containing two 250V, 4A fuses, one for each channel. A "Ground Lift" toggle switch is connected between the chassis ground (including the power cord's third prong) and the signal ground.

Occasionally a grounding situation with another component, such as a preamplifier or another amplifier also equipped with a three-pronged grounded line cord, will cause a 60Hz hum from a ground loop set up between signal and chassis ground. Switching the Ground Lift into the up, or open, position reduces 60Hz hum without resorting to a cheater plug. This proved useful in my system, with its 45' of single-ended interconnect runs between preamplifier and crossover.

The 3B-ST's output connectors consist of two pairs of gold-plated, 5-way binding-posts. For bridged operation, the two amplifier sections are operated with one channel inverted to form a single push-pull amplifier with double the output voltage.

Only the left unbalanced or balanced input is used in the bridged mode. The slide switch for switching between stereo and bridged operation can be found just to the right of the output terminals.

Opening a Bryston product requires a Roscoe S-1 square-recess screwdriver to turn the machine screws that fasten the top panel. These screws are snugly fitted into the chassis's threaded steel inserts by means of a locking thread-sealer, which lowers vibration and increases structural stability. The 3B-ST uses gold-plated board-edge connectors on driver and input boards. Soldered and other gas-tight mechanical connections are used for signal circuits. Circuit boards are very-high-quality double-sided epoxy-glass, with component-designator screening.

All Bryston amplifiers get a rugged 100-hour factory burn-in consisting of a squarewave input signal driving the amplifier into a capacitive load, slightly under clipping. Unlike a resistive load, which dissipates all the energy as heat, a capacitive load feeds back the entire signal into the amplifier, which puts maximal thermal stress on the output stages. The item "Bryston 3B ST Pro Power Amplifier Used great Condition" is in sale since Friday, June 25, 2021. This item is in the category "Consumer Electronics\TV, Video & Home Audio\Home Audio\Receivers & Amplifiers\Amplifiers & Preamps".